In front of the Brenta Dolomites we see the Adamello-Presanella and the border along which, a century ago, in an environment of snow and ice on the verge of survival, the Italian and Austro-Hungarian armies fought the First World War.

“On the highest and most solitary peaks I can breathe more freely, while others would feel lost”. With these words Elisabeth of Austria, known and loved all over the world under the name of "Sissi", described, at the end of the nineteenth century, her deep bond with the mountains, in particular, among the most loved, the Brenta Dolomites and Madonna di Campiglio where the Augusta Sovrana stayed for the first time in September 1889.

The beautiful princess of Wittelsbach spent a week discovering the wonderful landscapes, fresh waters and healthy air at the foot of the Brenta Dolomites. A mountain that remained etched in the soul of the "heroine of the dream". So much so that after a few seasons, it was 1894, there was a great comeback.

Thirty-three blanks fired from cannon batteries rang out throughout Trentino, the sounds of bells were scattered everywhere and the cheers of reverence of a people in celebration: Madonna di Campiglio and all of Trentino greeted the arrival of the Empress again, this once accompanied by the Emperor of Austria Franz Joseph. 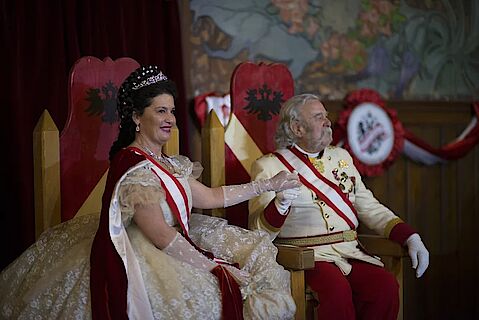 CELEBRATE YOUR CHRISTMAS WITH US !

JANUARY 2023 OUR LADY OF CAMPIGLIO